Sophie is one of our lovely and very knowledgeable conservation assistants here at Messenger. Below she talks about her “not so straightforward” route into conservation, what a day at Messenger looks like and updates us on one of her current projects at Oxburgh Hall.

“My route into conservation was not perhaps the most straightforward, however, it has given me a broad understanding of a number of disciplines that are all applicable to the work I do now. My undergraduate degree was in Art History, Archaeology and Anthropology; all incredibly important disciplines in the study of buildings and their history. During my undergraduate degree, I formed a particular interest in medieval art and architecture, writing my dissertation on an unpublished medieval manuscript that was yet to be studied. I decided to continue my education through a masters in Cultural Heritage and Museum Studies where I completed an internship with a medieval church trust alongside my degree. Here I learnt about the practical side of building conservation and other issues that come with it. It was also here that I decided this was the career path I wanted to follow; I really enjoyed the hands-on conservation combined with the management of these buildings. Soon after I finished my masters, I joined Messenger as a part time conservation assistant.

Now a full-time member of the conservation department, the tasks involved in my role are eclectic but mainly centre around recording. This includes recording the deconstruction of structures both as a historical record and to aid the rebuild process. Other reports I write are method statements, condition and final treatment reports. In addition to report writing, I also help on site when required. Some of my recent work has included assisting in the deconstruction of the chimneys and dormers at Oxburgh Hall, helping to repoint the bell tower at Holkham Hall and remove the glass from the vinery.”

Sophie spends the majority of her working week at Oxburgh Hall presently. Oxburgh, a moated manor house in Norfolk, has been home to the Bedingfield family 1476 and is where they still occupy part of the site today. Messenger are nearing the half-way mark of a two-year project to complete the restoration of the roofs, chimneys and dormer windows of the property. Sophie gives some insight below into the intricate detail of the work they are carrying out.

“Having successfully deconstructed all nine remaining courtyard dormers at Oxburgh, we are starting to record and dismantle the four dormers that overhang the moat. All four of these dormers vary slightly in their design, for example, some have steeper pitched gables while others have arched windows as opposed to the usual tracery design. Most notable however, is the re-use of bricks. Once removal of the window jambs began, we discovered that many had been made from other shaped bricks. Copings had been cut to make elements of the window corbel while tracery bricks had been cut to make jambs. This indicates that firstly these Victorian builders were very competent carvers; it would have taken a lot of skill to turn these moulded bricks into the shapes we see within the dormer windows. Secondly, it indicates that they were incredibly resourceful, which was possibly driven by financial factors. It seemed the emphasis was on overall aesthetics over the quality of the materials used.” 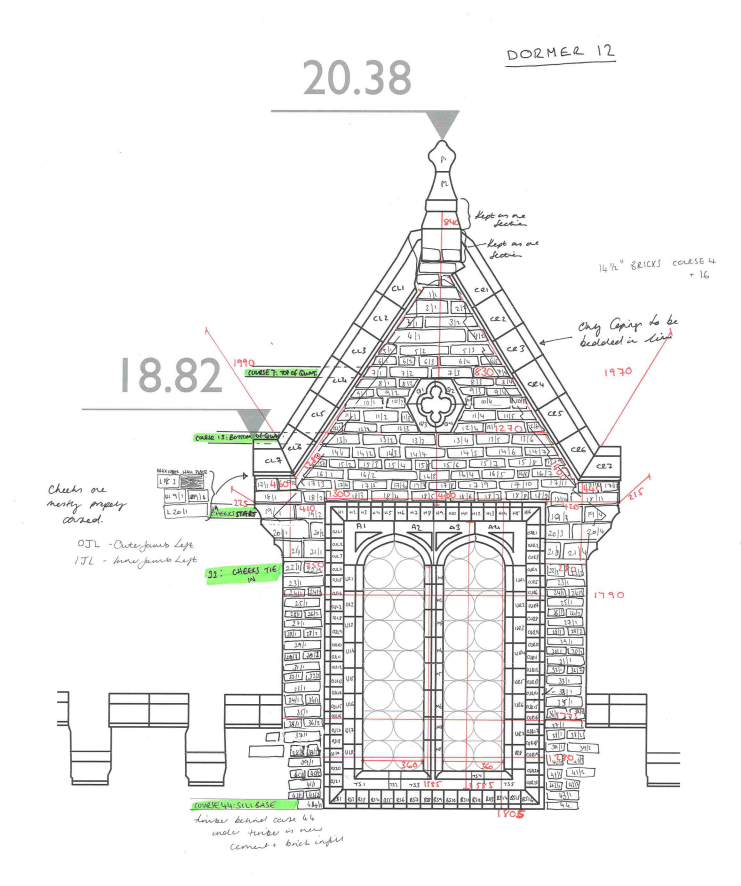 “In addition to the dormer windows, we have also deconstructed 22 highly ornate mock tudor chimneys at Oxburgh. Each one of these chimneys was dismantled course by course to allow for precise recording. Before deconstruction began, the chimneys were measured, images were taken and profiles were made to show the order of brick courses. To fully record the chimney as it was dismantled, we first assigned a number to each brick which were written directly onto them. This number was recorded on a drawing along with measurements and an image was taken of the course. Lastly a template was made from transparent PVC template paper which will be used during reconstruction. New bricks for the chimneys will be made by heritage brick specialists Bulmer Brick and Tile company to match the originals. At time of writing, five chimneys have been successfully rebuilt. These reconstructions employ specialist techniques such as using a red stopping mortar to point in the joints and a colour wash to stain the bricks a deeper red. The result will be identical to how they would have looked when they were first built in 1830.”

If you’d like to visit Oxburgh Hall whilst the roof project is underway, visit www.nationaltrust.org.uk/oxburgh to book your tickets.